I posted about my puppet, on my sculpture blog.
( Collapse )

I recently went up to Edinburgh for a week and a bit, mainly for the Maker Faire. It was a good trip, nicely balanced between being social and being alone and productive, in the company of an extremely fluffy and affectionate but profoundly deranged cat. I didn't get to see a lot of people I would have liked, though, largely because I barely did any advance planning, and that was largely because of a family crisis that I will probably write about in a later (filtered) entry.

While I was up there, Margaret Thatcher died. Just a couple of weeks before, I had reached the stage where I was confident I could finish my puppet of her ghost - which I've been sporadically working on for about a year - in the space of a day or two. That would give me time to get it done and bring it to the street party in Trafalgar Square, long planned for the Saturday after her demise, and that was indeed how it worked out. 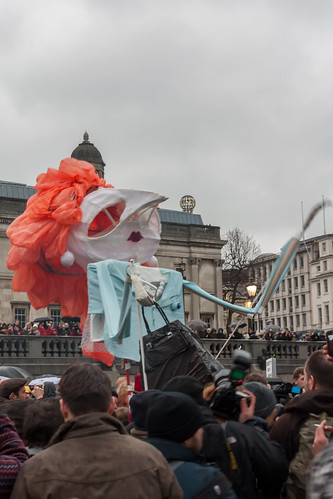 I'm always uneasy, at best, about celebrating anybody's death, but I do think it's important to remember her as in many ways a monstrous figure, whose demented vision of political economy did more to undermine community feeling and cooperation in this country than anybody else has ever managed. She stood for inequality and greed; she took it for granted that it was only by elevating our basest instincts that humans could thrive. In this she was wrong, and the history of the last three decades shows clearly how wrong she was - yet we have been ruled by Thatcherites of one stripe or another ever since. She was venerated by Tony Blair; Gordon Brown was the first to publicly suggest a state funeral for her; and the Tories now in power are pushing her lunatic doctrines further than she ever dared. In the light of this, and the multi-million-pound robbery from the public purse that is funding her war-themed celebratory extravaganza of a funeral, I make no apology for celebrating her passing. With a huge, monstrous puppet of her visage.

We are entering the post-Thatcher age, at last. That is a cause for rejoicing - even if it is arguably in bad taste, and even if there is a hell of a lot of fighting to do before Thatcherism is laid to rest. Let us remember her as a woman who probably tried to do what she thought was best, who overcame great obstacles of class and gender to become the leader of a Conservative Party which to this day disdains those from her background and sex. Let us remember her as a Prime Minister who did more to transform Britain than anyone else in the last half-century. But above all let us remember the damage she did, the insanity of the ideas underlying the transformation she effected, and the importance of undoing her legacy. If those too young to remember her rule are going to be fed eulogies to her, we have a duty to balance those tributes out. 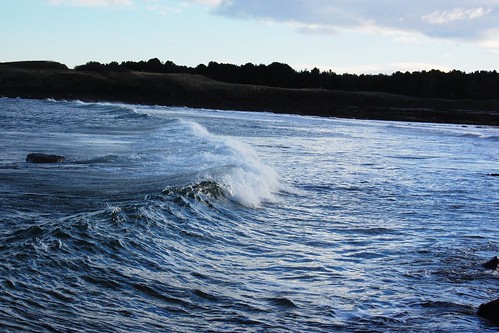 This is why.
Originally uploaded by 0olong

My brother made a new animation, for the New Economics Foundation (nef). It perhaps lacks the subtlety of some of his earlier work, but it's well done and I think it makes a good point concerning banks, money and public finances... 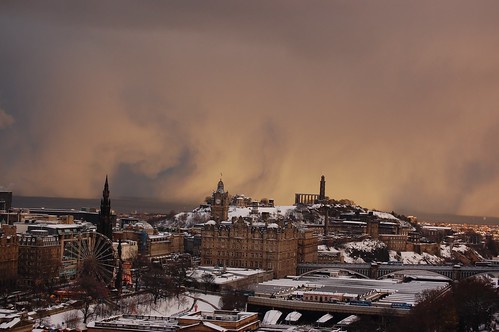 The timing was quite good.

I wrote a thing about Climate Camp here: http://oolong.co.uk/oo/climate-camp

I think I'll post more about it later. I need to articulate my thoughts about non-violence a lot more clearly...

So um there's probably a London community on here, isn't there? Can anyone point me to it? There seems to be only a search function to find people-and-communities, and I can't be arsed wading through pages and pages of users who somehow have something to do with London to find an actual community for it.

Alternatively, if anyone happens to be driving from London to Edinburgh before tomorrow (Sunday) night, you could make me a happy man. But I'll probably just get the coach, realistically.

I've long been a fan of the things you do, and thought that overwhelmingly you manage to live up to that 'Don't Be Evil' mission statement.

However I'm really very unhappy about the privacy implications of the way you've launched Google Buzz. If you're going to automatically generate a list of contacts based on who I talk to, you need to tell clearly me before you share it with the world, and ask me clearly if that's okay.

The privacy implications of failing to do so are downright disgusting. It needs to be opt-in, and flagged carefully, and I need to be able to opt out of appearing in other people's profiles - especially as long as you're not asking them clearly to opt in before displaying me there!

This is a shocking mis-step on your part, a betrayal of trust and extremely dubious under standard data protection laws, especially if it is confirmed - as it's been alleged - that people's contacts lists are displayed before they even say 'OK' to Buzz.

I expect you to fix this soon; until then I'll be angrily directing everyone to http://www.businessinsider.com/warning-google-buzz-has-a-huge-privacy-flaw-2010-2